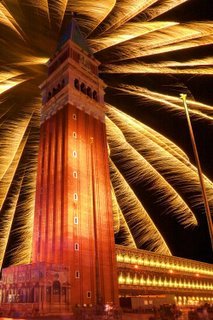 I must confess--I'm late to my own party!!! Sometime in the early hours of September 12, Weird Venice had its 10,00th visitor! Since then, the sitemeter's been clicking and we're closing in to 11,000. Thanks everyone--I love having you visit.

Special thanks to the photographer, Peter Fox Harrison, for use of this great fireworks photo. Here's Peter's story about the photo: "The photo is a composite of two shots. The first was taken in Venice in April 2005 on a Wednesday at dusk. The camera was a Nikon D70, exposure was about 15 seconds at f16. The fireworks are in the UK on November 5, 2005 in a dark cold muddy field at my local pub. I was standing on my own on top of a hill while my friends huddled around a warm bonfire, exposure probably a couple of seconds f8. The Venetian sky was ok but nothing special, so I had the idea of putting a firework behind the campanile in Photoshop, to make it more striking. I dropped a few firework shots in until I found one that worked."

It works--and I think it's the perfect photo to celebate 10,000! Now I'm gong to sit back and enjoy the fireworkds. To see more of Peter's work, go to www.fiatluxphotos.com.
Posted by SharonZ at 10:27 PM No comments:

I can't ignore it any longer. The story posted below is showing up in papers all over the world. So I figured I'd join in and post it here. I've never been able to understand why people what to have pigeons climb all over them. What about pigeon poop on your clothes or in your hair? Yuck.


September 14, 2006
Tourists love them, but Venice wants to clean up lagoon city's pigeons
By COLLEEN BARRY

VENICE, Italy (AP) - Just a handful of corn and the pigeons of St. Mark's Square swoop.

Nothing says "I've been to Venice" better than a photo snapped with pigeons perched on arms, shoulders, head, breast. Multiply that by, perhaps, a million times a year.

The constant feeding has created a pigeon problem in the lagoon city and feathers are flying. The pigeons are dirty. They carry disease. They are ruining the city's glorious facades and spreading filth in the piazzas. And the mayor wants action.

"In Venice we have a difficult problem, because the birds find food everywhere, and there are millions of tourists who want to take pictures with them," said Mario Scattolin, the top environmental official for the city of 800,000. "We're a small city with a huge influx of tourists."

No one knows for sure how many pigeons live in Venice's 6.4 square kilometres but the city estimates 40,000. About one-third of them pass through St. Mark's Square on any given day, Scattolin said.

Five of them perched one sunny afternoon on Constanta Aurel's outstretched arms, three on the right and two on the left. Then another settled snugly on her breast. The tourist from Romania squealed as her husband, Nicolae, shot pictures.

"It's a marvellous picture," he said. "Tourists come here to see the birds and the church. I think it's a big part of the attraction."

Venice already rounds up pigeons regularly and kills the sick ones but that doesn't seem to stem their numbers. Other attempts have included introducing contraceptives to their food supply and birds that eat their eggs.

The animal rights group LAV says the most effective method is to feed them less. But that would mean shutting down the corn vendors at St. Mark's. "They're a powerful lobby," said Massimo Vitturi, an LAV spokesman.

Still, nothing's impossible. London managed to curtail pigeon-feeding at Trafalgar Square, over strenuous public objections, and Venice Mayor Massimo Cacciari is also determined to project a cleaner image of his city. A new pigeon census is planned, with recommendations on population control due by year's end, Scattolin said.

But two separate ordinances appear to be at odds with each other. One forbids the feeding of pigeons. The other grants concessions to sell bags of corn to tourists - 100 grams for US$1.30).

"There have been pigeons in St. Mark's Square for a thousand years," said vendor Gianni Favin. "To see the piazza without pigeons is like seeing a tree without its leaves."

"It's not true that the pigeons are ruining the buildings," he said, motioning to a grimy arcade front. "That black is caused by smog."

Nineteen families live off the corn sales, Favin says, working two shifts a day at nine stands, with one vendor off each day. On a nice day he makes more than US$10, he says, on a rainy day, a tenth of that.

"I understand there are too many birds and that they are dirty," he said. "The city makes us pick up the bags. We do it for inconsiderate people but we can't keep on top of all the trash," he said, walking into the piazza to pick up a discarded paper sack. "Where are the city sweepers?"

Favin says if the city revokes their licences, the vendors will do what the sellers of counterfeit purses do - throw out a blanket with their wares and grab them up whenever a police officer appears.

Geoffrey Humphries, a British-born artist, sat in the piazza painting a watercolour of St. Mark's Basilica for an exhibit next month in Washington, D.C. "I first came here 40 years ago, and at 2 p.m., the bells would ring and a city employee would come with a bucket and feed the birds," Humphries said. "So my canvas would all be covered in feathers."

He's all for diminishing the pigeon population. "They are flying vermin."
Posted by SharonZ at 4:22 PM 2 comments: 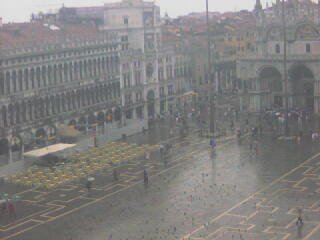 It looks like a rainy day in Venice today. This is from the Citta de Venezia webcam. Anyone in San Marco this morning?
Posted by SharonZ at 11:40 AM No comments:

From the Turkish Daily News:

"After the flood: Building on higher ground" shows 10 projects designed by nine Americans and a Turkish architect to reconstruct New Orleans which was flooded when Hurricane Katrina slammed into the city on Aug. 29, 2005, overpowering protective barriers that buckled under the huge weight of water.

"A year ago, just after the hurricane, the city was devastated and there were (rebuilding) initiatives in every which direction. We launched this competition to make people work together on a post-Katrina architecture," the exhibition's curator Christian Bruun told AFP.

"This is not just about a basic reconstruction. The whole relationship between architecture and the environment must be reconsidered," he said.

"New Orleans is condemned to flooding and hurricanes so we should explore new ideas and use new technologies so that for once and for all we find a solution to allow people to live there," Bruun said.

Among the projects displayed on the pavilion's walls is an adaptable house on stilts sitting three meters (yards) above ground.

Another architect imagined a house that would rise above the ground only when a weather alert had been issued.

To find out more about the Biennale, go to its website.
Posted by SharonZ at 9:16 PM No comments:

Chinese Film, Affleck and Mirren Win at the Film Festival

Mirren was named best actress for her portrayal of Queen Elizabeth II in Stephen Frears' "The Queen." Affleck won best actor for his role in Allen Coulter's "Hollywoodland," which dramatizes an investigation into the death of George Reeves, star of the 1950s TV show "Adventures of Superman."

To read the full story, go to My Way News.

Photo of the Golden Lion comes from the La Biennale website.
Posted by SharonZ at 10:26 PM No comments:

On July 25, 2005, I added Site Meter to Weird Venice to keep track visits. After all, I wanted to see if anyone was reading this blog. (Site Meter tracks page views and visits. It doesn't give any personal information or e-mail addresses of visitors. I don't know who's visiting. I just know how many and where their servers are located.)

I was gratified to see that other people shared my interest in Venice. It's been fun watching the number of visitors and which country they're located in. I like to see how far Weird Venice is traveling. Today, Highett, Victoria in Australia wins--it's 10,392 miles away!

Thanks to each and every one of you!
Posted by SharonZ at 10:02 PM No comments:

I just found a really useful google feature--you can use it to translate text from English to Italian (other languages are available, too). I've only tried a few translations of short phrases, so I'm not sure how it works on newspaper articles or longer length text. Check it out!
Posted by SharonZ at 11:55 AM No comments: 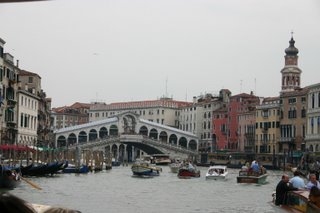 Every so often a story about a boat run amuck crosses my desk. This one come from Buongiorno Venezia (a great source for Venice stories and info).

CURIO. An event that might have ended in tragedy had, everyone admitted, its funny aspects. Because of improper rigging during an unloading operation, the pilot of a boat was tossed overboard. That is quite normal in Venice. But, since the engine was running and the boat wasn't moored properly either, it began to spin in a circle with the propeller coming dangerously close to the pilot and another person who tried to board the boat but... missed. Acting as if it were "frightened", the boat knocked against the banks and the other boats, creating confusion among the gondolas moored nearby in Bacino Orseolo, the most crowded "stazio" (gondola mooring) in Venice. The scene continued for half an hour under the curious gaze of hundreds of tourists until the fire department arrived and secured the craft.
Posted by SharonZ at 8:40 PM No comments: 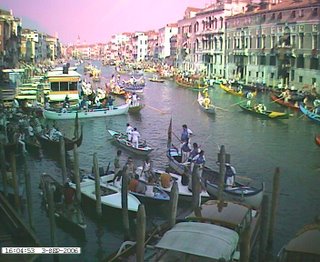 Today was Regatta day in Venice. I've always wanted to witness one. Instead, I watched it via webcam today (there's a link to this Grand Canal webcam on the right). Not quite the same as being there. The photo is one that I took from the webcam. Any eyewitnesses?

For more of a discussion about the location of the webcam, go to the Slow Travel forum.
Posted by SharonZ at 11:34 PM No comments:

I've been making a few changes in the way Weird Venice looks. Do you like it? Let me know what you think!
Posted by SharonZ at 10:43 PM 1 comment:

Want a good cup of coffee? No need to go to Venice anymore. As our friends from Buongiorno Venezia report in the following article, Caffe Florian has expanded far beyond Piazza San Marco. They're now serving coffee in Florence--and soon to open in Abu Dubai, Moscow, Beijing, and Toyko. No word if the prices will be the same...

"Starting a few days ago, the Caffé Florian, while not the only historic coffee house that has made an impression in St. Mark's Square for 280 years, became a brand name. About a month ago, a Caffé Florian opened in Florence and yet another in Abu Dhabi in the United Arab Emirates, and the next will be located in Dubai. Others are expected in Moscow, Beijing, and Tokyo, where the trademark was just registered. The cities are the most varied in the world, but the ambience inside each cafe will be the same, and the products for sale -- coffee, tea, and chocolate, as well as crystals and perfume -- will rigorously adhere to the Florian brand's standards. The fittings of each cafe will re-create the famous calm and elegant Venetian way of life."
Posted by SharonZ at 8:21 PM