The Pigeons Can Stay -- the Vendors Have to Leave 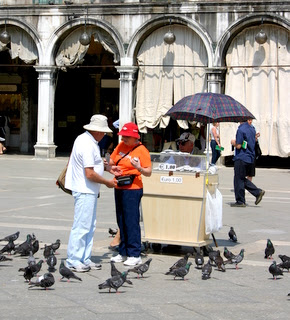 Yes, the pigeons are a nuisance. They cause lots of damage. I am among those who can't understand the thrill of having pigeons all over me -- even I'm standing in the middle of San Marco. But now it's not the pigeons under attack;it's the birdseed vendors. Stands like these are an endangered species. (I took this photo in May 2004).

The following article from ANASA.it explains it:

Venice birdseed vendors in a jam
Council bans them as part of pigeon purge
(ANSA) - Venice, January 10 - The traders who sell pigeon food in St Mark's Square expressed anguish on Thursday after city hall passed a measure banning them from ever doing so again.

''It's absurd to take away our jobs like this. We have to live,'' said Sergio, one of the 20 or so Venetians who run the small stands selling bird seed and corn on the lagoon city's most famous piazza.

Like several other European cities, Venice has already banned people from feeding pigeons in all other parts of town, saying they are a public health menace and a nuisance, eroding monuments with their excrement.

Despite being well aware that many tourists find the flocks of pigeons charming, the council on Wednesday night decided to finish the job by driving the birds from their last refuge in the city.

''If the council wants us to go away it should at least give us a valid alternative,'' protested Sergio. ''Some of us have families to support and mortgages to pay. If we don't work, who's going to pay? The mayor?'' The driving force behind the campaign to rid St Mark's of pigeons is city commerce councillor Giuseppe Bertolussi, who is convinced that the time has come to end what he calls a ''health emergency''.

Bertolussi's initiative has the backing of heritage experts who say pigeon droppings are eating away at St Mark's flagstones and increasing the risk of the 'acqua alta' that puts the square under water for much of the winter.

Local people also became more sympathetic to the cause after a report by the Nomisma research group found that the presence of pigeons in Venice costs each resident some 275 euros a year to clean up the mess and damage.
Posted by SharonZ at 4:19 PM No comments:

Dream of Italy -- sounds like something a lot of us do, but it's also a great travel newsletter. It's a great resource if you're going to Italy (not just Venice), or if you're not going to Italy this year, but dream about it.

The newsletter can be delivered electronically or through the mail. If SUBSCRIBE BEFORE JANUARY 8th (that's tomorrow), you'll receive a free 2-DVD set of the Italian hit film Cinema Paradiso. ($24.95 value)

You can find some free articles here if you'd like to check it out.
Posted by SharonZ at 7:41 PM No comments: