Harry's Bar in Danger of Closing 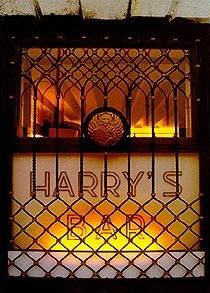 A recent article in the Wall Street Journal caught my eye and made me feel sad. Harry's Bar is, "Drowning in debt, struggling with a decline in American patrons and battling to cut labor costs, Harry's Bar—inventor of the Prosecco-and-peach purée cocktail known as the Bellini—has turned to a distressed-debt fund to revive its business."

I have some fond memories of Harry's. The first time we went, we were shown to the stairs to the upstairs dining room. As we climbed the stairs, we heard feet running on another staircase. When we arrived at the top, our slightly out of breath host was waiting for us. He'd run up the back stairs!

Another time, we were sitting near a table of an American family. Mom, Dad, a teenaged son and a pre-teen son. The men were all wearing khaki pants, navy blue blazers and blue shirts. In the middle of the meal, they started to argue about something. They were very proper. No raised voices. No scene. But we could tell they were fighting. The teenager got red in the face; he clenched his fists and his eyes were wild. Then, the fight went out of him and the meal resumed.

Harry's always provided us with great people watching. One time an older gentleman came in with a much younger and very attractive woman. What I would call an "uncle" out with his "niece." She was swaddled from head to toe in a gray wrap. They sat and talked. He ordered wine. It came and the woman must have approved of the choice because she excused herself to go to the restroom. When she returned, the wrap was gone revealing a short cocktail dress....

We  used to enjoy our dinners at Harry's, but prices went up and the service and food declined. We don't go to Harry's any more, but have fond memories. It would be a shame if it closed. Click here to read the article.

The photo is not mine. I got it from Harry's Bar website. I suggest reading Harry's Bar: The Life and Times of the Legendary Venice Landmark.
Posted by SharonZ at 12:11 PM No comments:

Happy New Year to everyone! May 2013 bring us all many opportunities to visit Venice. I'm starting the new year off right--I booked tickets for a May/June trip to Venice. Much more to follow on that...... Thanks to an Amazon gift card from my sister, I am reading a great history of Venice called Venice: A New History> by Thomas F. Madden. I don't know how many histories of Venice I have read, but Madden's book is special. From the opening words of the first chapter, I was hooked:

"No one forgets a first glimpse of Venice. Whether arriving by plane, boat, train, or car, there is that startling moment when one looks across the waves and finds what should not be there—stone towers, rich churches, and packed buildings rising up out of the sea. The extraordinary beauty of Venice only adds to its improbability. How does such a city exist? Who were the people who built it and why did they think it worth such unyielding efforts?"

The writing is excellent and entertaining. Madden really makes the history come alive. The author's page on Amazon.com says, "Thomas F. Madden is Professor of History and Director of the Center for Medieval and Renaissance Studies at Saint Louis University. He has appeared in such venues as The New York Times, Washington Post, Wall Street Journal, USA Today, and The History Channel." P.S. I don't know Madden and didn't receive any compensation for this post. I am simply enjoying this book and wanted to tell you about it.
Posted by SharonZ at 2:23 PM No comments: