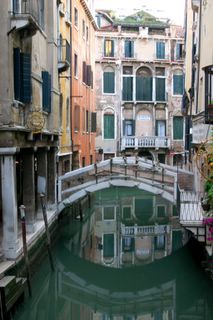 THE CANALS ARE CLOGGED! CHINESE SEAWEED INVADES VENICE! (even though it's a serious problem, I had to chuckle when I saw the seaweed described as a "tagliatelle-like weed.")

From BBC NEWS:
Venice battles seaweed invasion
Venice is bracing itself for its summer tourist invasion, but an unwelcome newcomer has joined the thousands of visitors filling the Italian city.

This unwanted guest is a huge seaweed, originally from China, that grows up to three metres long.

The advent of summer means it is thriving in the warm shallow waters of the lagoon, near the city.

Scientists are warning that if left to its own devices it could clog up the city's famous canals.

Researchers say the voracious weed, undaria pinnatifidaea, it was probably brought to the Adriatic accidentally by a ship that dumped bilge water into the sea.

From the Adriatic it spread into the nearby lagoon and has now reached as far as the city itself.

The tagliatelle-like weed is so big and invasive that it leaves little space for local species.

Biologists at Venice's Natural History Museum say that while the seaweed is unlikely to damage the city's historic buildings because it does not have roots, it is almost impossible to destroy and the only answer may be to find another foreign predator to eat it.

The seaweed is the second invader to make Venice its home in recent years. Filipino clams have already virtually wiped out local species in the lagoon.

Posted by SharonZ at 8:03 PM No comments:

Who Took My Sidebar???

You may notice that the left side of the page is blank. My sidebar has disappeared. i'm trying to find out why and to get it back. If you took it, please return!

Wow! That's fast service. I posted the message and went to look at the blog. What'da you know? My sidebar came back. Thanks!
Posted by SharonZ at 9:19 PM No comments:

Non-Stop Flights from Atlanta to Venice

I hate going to JFK airport. But I'll do it to take the non-stop Delta flight to Venice. I can leave on a Friday night and be in my apartment in Venice in time for lunch the next day. Now, if you live in Atlanta, you can enjoy a non-top. From our friends at Buongiorno Venezia:

Americans are arriving in Venice in ever greater numbers. As confirmation of this two weeks ago, a third non-stop flight was inaugurated between the U.S. and Venice. As of Wednesday 7 June, there has been a daily link between Venice and Atlanta, adding to the daily flights from New York and Philadelphia. Delta is the carrier on the Atlanta and New York routes, while U.S. Air flies from Philadelphia. For the occasion, the new American ambassador to Italy, Ronald P. Spogli, arrived in Venice for the first time and, during his inaugural address, underlined the fondness of Americans for Venice and Veneto. He supported his assertion by pointing out that the new flight, originally scheduled only for the summer months, was extended year 'round.
Posted by SharonZ at 8:55 PM 5 comments:

Venice Looks for an Alternative to MOSES

From our friends at ANSA.it:

After 30 years of debate and testing, work began on the 'Moses' flood barriers in 2003. The massive construction project, due to be completed in 2012, is expected to cost 3.5 billion euros.

But in the wake of widespread concern among Venetians and environmentalists over the impact of Moses on the lagoon, Mayor Massimo Cacciari called on Monday for a "review" of the project.

A measure approved later by the city council called for a pause for thought and "the possibility to test simpler and less costly solutions" to Venice's perennial flooding problems.

Cacciari pointed out that ultimately the government - which is footing most of the bill - will have the final say on whether Moses continues to be built and, if so, in what form.

He argued that first of all studies should be carried out to gauge whether the environmental impact of Moses is sustainable and whether it can be reduced in any way.

An assessment on the impact of Moses in 1998 came to negative conclusions, he noted.

At the same time alternatives to the metal barriers could be looked at to see whether they offered a better - and possibly cheaper - solution.

Work done until now was "not to be thrown away", he said, adding: "It's a question of continuing in a way which is compatible with whatever comes out of the review."

Supporters of Moses saw the mayor's move as a strategy to stop construction work and eventually block the project altogether.

"This is senseless. Its environmental bigotry against the defence of Venice and its monuments," said art critic and former culture undersecretary Vittorio Sgarbi.

Moses consists of 79 barriers, which would lie on the seabed at the three entrances to the Venice lagoon for most of the time. Thanks to compressed air pumped into them, they would rise up when high tides were forecast and so stop seawater entering the lagoon from the Adriatic Sea.

Flooding is a constant problem for Venice and the picturesque St Mark's Square is covered with water dozens of times every year.

The previous centre-right government in Rome adopted Moses as one of the jewels in its nationwide crown of major infrastructural projects but the attitude of the new centre-left government - of which the Greens are a member - has still to emerge.

According to experts, Venice is increasingly subject to flooding for three reasons: the lagoon floor is rising because of incoming silt; the extraction of methane gas in the sea off Venice causes its islands to sink; and sea levels are rising in general because of global warming.

Moses is opposed by environmentalists worried about the impact of the system on the lagoon's ecosystem and by many Venetians who argue that the money could be spent on cheaper, less damaging solutions.

The European Commission opened infringement procedures against Italy earlier this year in connection with the environmental impact of the flood barriers.

The European Court of Justice has already found Italy guilty of breaking a 2000 EU nature directive by failing to set aside protected areas for the birds who live around the lagoon.

The mayor is in an awkward position because he was voted into office last year partly on the back of promises to 'review' the flood barrier project. But not all his allies in city hall agree with the idea of slowing down or halting construction.

With Cacciari's supporters divided and opposition councillors keen to continue building, it was unclear what the outcome of Monday's concil meeting would be.

Cacciari said he wasn't proposing dropping the Moses project altogether, but doing a series of tests and studies to see whether its environmental impact could be lessened and its effectiveness improved.