Please make a donation to help the survivors of Hurricane Katrina. Visit www.networkforgood.org for a list of organizations and online donation forms.
Posted by SharonZ at 7:41 PM No comments:

"Punk" Dogs Set Off a Riot on the Vaporetto.... 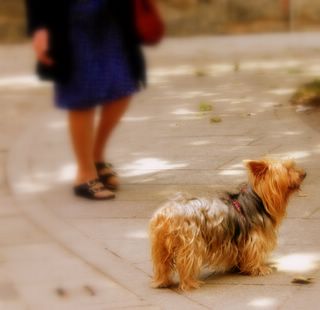 (AGI) - Venice, Italy, Aug 29 - Punk tramps bring their dogs around cities almost always without a leash, and yesterday a group of them started a riot in a steamboat on the Grand Canal in Venice. Seven punks, accompanied by about 10 dogs, attempted to mount on the 82. It was 2am and the gang was prevented from entering the vessel by local transport seamen. A riot started which involved three of the punks, all in their 20s, the transport personnel and also two passengers who were trying to help the seamen. The passengers especially were beaten up and later taken to a casualty ward, where they will be treated for 7 and 15 days. The 3 punks were charged for interruption of a public services and damages, as they had also broken the steamboat's furniture. (AGI) COPYRIGHTS 2002-2005 AGI S.p.A. - [P.S. The dog in the photo is NOT a punk dog! It's a well-behaved Venetian dog.]

Posted by SharonZ at 7:37 PM No comments:

One of the Arsenal Lions 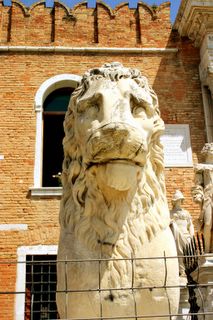 "The statues of two lions still guard the entrance to the Arsenal. They were brought home from Athens as booty by Francesco Morosini after the reconquest of Morea in 1678. The seated one was once part of a fountain of Piraeus. The carved inscription in runic characters probably refers to the brutal repression of the Greeks by the vernighi (Scandinavian mercenaries in the pay of Byzantium) in 1040." (Venice, Knopf Guides, pg. 178)

Posted by SharonZ at 8:31 PM No comments:

What Are You Waiting For? 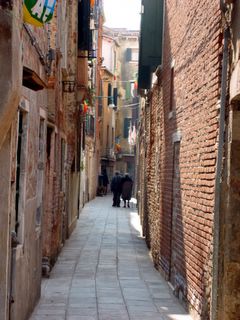 You've always dreamed about going to Venice, but haven't gotten there yet. I have to ask: WHAT ARE YOU WAITING FOR? Go before you're too old to enjoy it. The summer's almost over--and that's good because September and October are wonderful times to experience Venice. Go and send me some photos from your trip. Maybe I'll post them here. And if you really can't get to Venice, keep on visiting me here. I'll do my best to show you some different views of Venice.

"There is no substitute for going to Venice. The experience can, however, be enhanced by reading about the place." (Cities of the Imagination: Venice, Martin Garret, pg. xi)

Posted by SharonZ at 9:21 PM No comments: 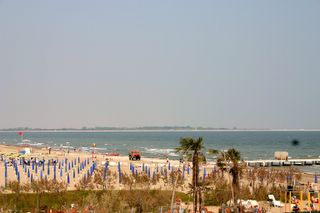 On August 10th, ANSA.it reported that "an Australian tourist got away with a scolding from Venice police on Wednesday after he abandoned a sluggish water bus and plunged into the Grand Canal, fully intending to swim to his hotel."

The man, who jumped in near the Rialto bridge and intended to swim to his hotel near Piazza San Marco, wasn't drunk, according to the report. "Some observers suggested he may have been inspired by Lord Byron, the English Romantic poet who enjoyed swimming about nude in Venice's canals."

Well, Lord Byron would not have been impressed. This tourist's "swim" was nothing compared to Byron's marathons. Here's how he described one in a February 21, 1821 letter to John Murray:

"In 1818 the chevalier [a member of certain orders of knighthood, or of the French Legion of Honour, etc., Oxford Pocket Dictionary] Mengaldo (a Gentleman of Bassano) a good swimmer, wished to swim with my friend Mr. Alexander Scott and myself. As he seemed particularly anxious on the subject, we indulged him. We all three started from the island of the Lido and swam to Venice. At the entrance of the Grand Canal, Scott and I were a good deal ahead, and we saw no more of our foreign friend, which however was of no consequence, as there was a gondola to hold his clothes and pick him up. Scott swam on past the Rialto, when he got out less from fatigue than from chill, having been for hours in the water without rest of stay except what is to be obtained by floating on one's back, this being the condition of our performance. I continued my course on to Santa Chiara, comprising the whole of the Grand Canal/beside the distance from the Lido, and got out where the laguna once more opened to Farina. I had been in the water by my watch without help or rest and never touching ground or boat for four hours and twenty minutes." (Knopf Guides, Venice, page 125, 1966)

To give you some perspective: it's about 2 miles from the Lido to the grand Canal and the Grand Canal is about 2 1/2 miles long. Not a bad swim.

If you can't make it to Venice, Italy, this summer, heard for upstate New York!

A Little Bit of Venice on Upstate New York Canal

SENECA FALLS, N.Y. Looking for a slice of romantic Venice, Italy in the Finger Lakes region? Then head to Seneca Falls, home to upstate New York's only gondola business.

State prison instructor David Finster has never been to the city of canals, but he has started a gondola business on the Seneca-Cayuga Canal. He says he got the idea after reading an article about a businessman who started giving gondola rides in Stillwater, Minnesota.

Finster says Seneca Falls is ideal for a gondola business because of the area's bucolic landscapes, famous vineyards and rich history.

Finster's traditional Venetian gondola started taking on passengers in early July and will continue the service through September. The gondola can carry up to five passengers and rides of up to minutes costs 85 dollars.

Copyright 2005 Associated Press. All rights reserved.
Posted by SharonZ at 9:26 PM No comments:

One of My Favorite Views.... 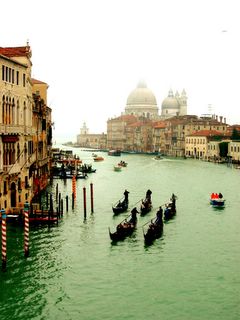 I took this from the top of the Accademia Bridge in March 2004. We had gone to experience Carnevale, but after an hour, decided that Carnevale was nothing more than an excuse for tourists to get drunk. We spent the rest of the time exploring and being delighted by winter in Venice. This is one of my favorite memories from that period. (That spot in the right-hand corner is a bird--not a low-flying airplane.) What's your favorite view of Venice?

Posted by SharonZ at 8:12 PM No comments:

The Rest of the World is Just as Weird...

I'm reading THE SKY'S THE LIMIT by Steven Gaines. In this book Gaines explores the world of mega-million- dollar real estate. Co-op boards that discriminate for no reason. A top-selling Realtor who lives in a $1,000 a month rent controlled apartment. Another Relator who won't work on any apartment selling for less than $5 million. It's a fun book--and will make you wonder what makes an apartment worth $50 million.

Here's the image that made me break my promise to focus only on Venice: "When Dr. Kissinger walks his dog in the neighborhood [near the River House at the East River, between E. 52nd and E. 53rd Streets], a security man walks behind him and cleans up after the dog because it would be undignified for the former statesman to be seen scooping up dog poop." (Steven Gaine, THE SKY'S THE LIMIT, pg. 69)

Ever Wondered About Those Ropes....

When you ride the vaporetti watch the marinaio (the man or woman who ties the boat to the dock, opens and closes the gate, and sells tickets.) With a flick of the wrist, they wrap the thick rope against the stanctions on the dock. The vaporetto pulls forward and the rope groans. Will it hold? It does and pulls the vaporetto back to the dock.

I’ve always wondered about the lifespan of those ropes. So during my recent trip to Venice, when I was doing a late-night trip on the #1 (one of the best times for sightseeing), I asked the (cute) marinaio about the ropes and their lifespan. “They last two weeks, if the weather’s good,” he said, “Three or four days if it’s raining–much less if the pilot is bad....”

The ropes, he said, are made of manila and have a nylon core. Pure nylon is not good because when a nylon rope breaks, it snaps back and hits people on the vaporetto. The blended ropes just fall into the water.

Sorry, but I don’t have any photos of the ropes–I promise to take some on my next trip.
Posted by SharonZ at 3:49 PM 2 comments: