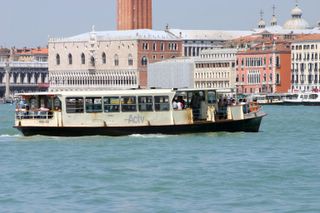 From our friends at "BUONGIORNO VENEZIA - This Week in Venice" published by VENICEWORD INTERNATIONAL MEDIA SERVICES:

"Last Tuesday, 2 May, at 5:45 a.m., a motorcycle collided with a bus on the Ponte della LibertÃ¡, blocking the only road that links Venice to the mainland. The accident, though perfectly ordinary, caused total paralysis of public transit until late morning because it was impossible for the water bus pilots, most of whom live on the mainland, to reach Venice to start their shifts. The event demonstrated once again how few alternatives exist when the one route into the city is interrupted. The only alternative in these cases is to take the train." Maybe they should have called for a gondola...

Posted by SharonZ at 7:50 PM No comments:

My post of May 3rd got me thinking about tourists in Venice. Here's my favorite tourist story:

One morning, about two years ago, I was in Venice and got up very early to wander around the city. It was about 8 AM when I got to Piazza San Marco and the square was deserted--except for one tourist (not American). She asked me to take her photo in front of the basilica. I did and as I passed her camera back to her, she gestured at the church and said, "What is that?" Dumfounded, I tried to explain San Marco. After about ninety seconds, she thanked me and held out her map. "What else should I see?" she asked. I pointed out the Rialto Bridge, Accademia, and a few other places. She thanked me again and left. Wonder if she even knew she was in Venice?

Got any tourist stories?
Posted by SharonZ at 9:32 PM No comments:

I've been a fan of Donna Leon's Commissario Guido Brunetti mystery series, but lately I've been feeling a bit annoyed with the things she writes about American tourists. Yes, Americn tourists are sometimes loud, sometimes rude, sometimes dressed inappropriately. But you know what, tourists from other countries are also guilty of being loud, rude, dressed weird. So why does Leon write things like, "Brunetti was surprised that a crowd that large could find room there [the Paganelli], and that Americans would have the good sense to choose it." (Blood from a Stone, pg. 21) Or, "They had to be Americans. They might as well have been draped in the flag. White-haired, both of them, they gave the bizarre impression that they were dressed in each other's clothing." (Blood from a Stone, pg. 17)

I'm not going to continue listing quotes; I think you get the idea. Now that her books are being released in the US, I wonder if others will start to feel the same way. It's a shame, because her books give a great view of Venice.
Posted by SharonZ at 1:49 PM No comments: